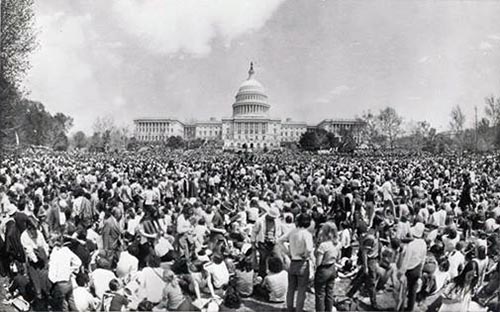 The Day I (Almost) Stormed the Capitol

My roommate and I left our college campus in western Pennsylvania to drive to Washington DC for “Out Now,” the largest-ever anti-Viet Nam War protest march.

The first day, Friday getting there, is a blur. Us in our long hair, bell-bottoms and repurposed Army jackets. The high school friend of my roommate and her car (since we didn’t have one). Hours of driving the 300 miles of unfamiliar highway. But I know the mood was excitement! We were standing up for something we believed in (“PEACE!”) We also expected to find something else we admired (“PARTY!”) And cigarettes were only 50 cents in the nation’s capital, so we planned to “stock up!” (This meant at most a carton apiece, since our cash was limited).

I’m sure we drove around the city, looking for where to land our vehicle (difficult to do with an influx of half a million people). I don’t remember a single meal, so we probably ate snacks from convenience stores. Most likely we grabbed a few hours’ sleep scrunched up in the car.

When the sun came up Saturday morning, though, we were on the move—on foot. It wasn’t hard to figure out where to go, considering the salmon-like flow down Pennsylvania Avenue. Black and white, young and old. Some in wheelchairs and others wearing a clerical collar. Parents with children riding on their shoulders. All kinds of people were against what the U.S. was doing in Viet Nam.

Our crowd grew ever larger as we moved toward the Capitol. We were chanting things like, “Hell no, we won’t go!” referring to the draft, and the more general, “Power to the people! Right on!” Until finally we were a sea of protesters, shoulder to shoulder, waves churning at the bottom of the steps. Shouting our chants, calling for President Nixon to come out and face us. (He didn’t.)

Suddenly a few rogue voices began to rise above the noise of the crowd. “Storm the Capitol!” here. “C’mon, let’s take it!” there. There was a moment when I felt the crowd begin to surge, the bodies behind me pressing to go forward. That was the fulcrum when the huge but peaceful protest could have tipped and become a mob, and I would have been swept up in it.

It ended as quickly as it started. Not because of a police presence (I don’t remember one). It was because the organizers of the event—clearly well trained, very present and LOUD—shut it down. “NO! This is a peaceful protest!” and “STOP RIGHT HERE! We are not going there!” They pushed back firmly until the rogue voices gave up and the crowd stopped surging and returned to a mellow flow. It was impressive. We were there for peace. We didn’t want anyone to get hurt (like that little girl hanging around her dad’s neck over there). We didn’t want to go to jail (if we could barely afford cigarettes, how could we afford bail?) Our parents didn’t even know we were there—did we want them to see us bleeding on the evening news?

Instead, we listened to impassioned speeches from people like John Kerry. A Viet Nam vet who returned with a strong conviction against the war, and later entered politics and served as U.S. Secretary of State. The mood was passionate, but also peaceful and positive, until finally we were ushered by the organizers to turn and disperse.

I wish those organizers had been the ones in charge at the Capitol on January 6, 2021.

Not for the Trump mob that invaded our government with the intent to create chaos, do violence, and overturn the U.S. government. But to fill the void left by lack of law enforcement and turn those thugs away.

Maybe it wouldn’t have worked. As far as I know, our organizers were committed to non-violence. But would they have responded with force if our crowd had turned into an unlawful mob? And could they have responded with strength to Wednesday’s insurgents, hell bent on breaching and bragging afterward, but also carrying zip ties and guns, and because of whom lives were lost?

Some would say that the movement I was a party to was no better—that there were radical factions (there were), violent events (yes), and lives lost (sadly). But I do see one contrast. The majority of that movement was largely people like me who love our country; who were deeply saddened to see the ways in which our government did not live up to our constitutional imperatives of equality and agency; and who wanted our legislators to do better. The domestic terror attack this week was perpetrated by people who love ‘our country’ only if it follows their white supremacist and evangelical agenda and allows their oligarch to rule. Yeah, big difference indeed.

Many things about this week’s attempted coup need to be investigated, such as why the police presence was so small and unprepared, and what to do about those in power who encouraged and supported it (‘President’ Trump—that title still rankles, considering that it puts him in the company of patriots like Obama, Carter, JFK, FDR) and Senators Hawley, Cruz, et. al.) My wish list would include the immediate removal of Trump (unfit is an understatement). Impeachment proceedings for sure (and strip him of every presidential perk that he doesn’t even deserve to enjoy).

And most of all? I want to see Trump and his criminal family in prison garb behind bars where they belong. Oh, how I long for that. Their crimes are many and heinous.

Time will tell. All will be revealed. Unfortunately, it doesn’t mean all will be investigated and punished as they deserve. I’m generally a fan of the Democratic Party. But I’ve seen time and again that our … hmm, I don’t even know what to call it. Kindness? Forgiveness? Or just lack of cajones? Suffice to say we’re not so good at standing up for ourselves and our beliefs, or taking to task those who commit aggressions against us.

Maybe finally that will change.

60 thoughts on “The Day I (Almost) Stormed the Capitol”